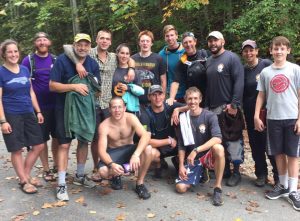 The Outdoorsman Triathlon is the nations oldest continuous triathlon and consists of a 1 mile swim, 4 mile run and an 8 mile paddle down the Little Tennessee River. Individual competition is held on Saturday and 3-person relays (1 swimmer, 1 runner, 1 paddler) are held on Sunday.  In 1976 outdoorsman Payson Kennedy (founder of the Nantahala Outdoor Center), Olympic canoeist John Burton, and Georgia Tech professor Russ Callen issued a challenge to athletes to come battle the raw elements of the Great Smoky Mountains in an outdoorsman’s triathlon. This race even has in the rules that “assistance with changing clothes, putting on shoes, or supplying food or drink to competitors is prohibited. Competitors are on their own once they begin the race and can only receive assistance from race officials”. The rules governing the running section state “no form of locomotion other than running, walking, or crawling is allowed”. A news article in Triathlon Today concerning the Outdoorsman Triathlon stated that had these competitors been around 200 years ago “these mountains and gaps would now bear their names”.  For new rule changes effective 2013 please check here.