The Whitewater Open Canoe Downriver 2008 Nationals has been selected as a 2008 American Canoe Association (ACA) National Award Recipient.  Thanks to Tom Blue and his energetic staff for hosting the WWOCD on the French Broad river near Hot Springs, North Carolina in Pisgah National Forest.  FB Canoe Racing, Inc.inaugural event was held on July 10th 2008. The announcement was made at the ACA 2008 annual meeting held in Fredericksburg VA.

The 2008 WWOCD will be held on the French Broad River the downriver race course will be Section 9 of the French Broad River in Pisgah National Forest. The downriver races will start at the put-in near Barnard, NC and finish approximately 8.5 miles downstream in Hot Springs, NC (population 650). The sprint races will be on an approximately 1.5 mile portion of the upper half of Section 9 between the Barnard and Stackhouse access points. A video that includes some of the rapids on the sprint course can be found by clicking here (courtesy of Larry Ausley, member of the American Canoe Association’s Board of Directors). Competitors will have to paddle about 2 miles down from Barnard to the starting line for the sprint races. Due to shuttle requirements, racers will be limited to competing in two sprint classes. For the downriver races, there will probably be mass starts by class, but individual boat starts on one-minute intervals may be used if necessary. It is estimated that competitors will take approximately 50 minutes to 70 minutes to complete the downriver course and 8 to 10 minutes to complete the sprint course, depending upon water level.

The French Broad River is an interesting venue for whitewater open canoe racing. Section 9 of the French Broad River consists of about 8.5 miles of Class II and III rapids. The average drop is about 25 feet per mile and the median volume in mid-July is about 1,800 CFS. The river is relatively remote, flowing through Pisgah National Forest, though there is an access maintained by the Forest Service halfway down the run (the Stackhouse access). At the median flow, the French Broad is easier than the Youghiogheny, site of the 2007 Championships, and perhaps slightly more difficult than the nearby Nantahala River (except for Nantahala Falls). As the name implies, it is a wide river flowing generally west (toward former French territory, thus the name). The water level is not dam-controlled and, therefore, can vary dramatically. For instance, in mid-July of 2007, the flow was a very low 650 CFS, while in mid-July of 2005, the flow was 7,900 CFS. At extreme high or low flows, it may be necessary to adjust the start and finish points of the race. A superb source of information about Section 9 and the Hot Springs area is the Boating Beta page provided by Chris Bell; see www.boatingbeta.com/runs/fbs9.htm

Photos from the WWOC 2002 Nationals 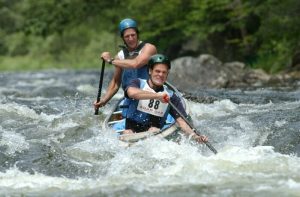 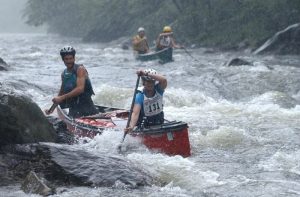 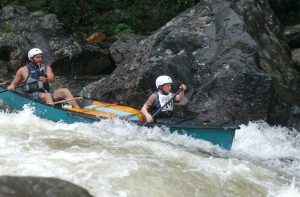